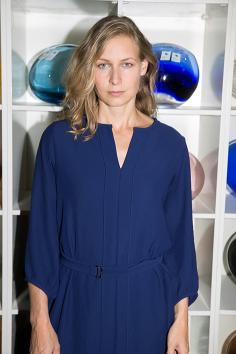 Simone Lüling, *1975, studied industrial design at the Zurich University of Design. She received the Swiss Federal Design Prize for her thesis, one of most prestigious design awards in Switzerland. Later on, she worked as a designer for Jasper Morrison in London. She also founded a gallery dedicated to young contemporary artists in Berlin, called ‘Cruise & Callas’. Since 2010 she worked as a product designer and as an interior design consultant. 2015 was foundet ELOA by Simone Lüling.

The idea of ELOA appeared while working on a commissioned project in a loft space. The concept for lighting was to frame the different functional areas –cooking, eating, working. As the nucleus of the apartment, this room could also be given different atmospheres according to the time and occasion. In the following year, ELOA was developed, generated by the desire to create a variable, modular system of hand-blown lights.